FERGUS – “Who has the power?” shouts a woman. “We have the power,” they reply.

Education workers from the two school boards in Wellington County, who are represented by the Canadian Union of Public Employees (CUPE), are on strike today and are actively demonstrating around the constituency office of the MPP for Wellington- Halton Hills, Ted Arnott, in downtown Fergus.

The strike comes following a breakdown in contract negotiations between the province and the union yesterday and the passage of the Keeping Kids in Class Act (Bill 28), which imposes a four-year contract on workers and uses the Canadian Charter of Rights and Freedoms. ‘ clause notwithstanding the suspension of the right to strike for five years. According to Education Minister Stephen Lecce, the November 4 strike is illegal.

At the heart of the bargaining dispute is the union’s demand for a wage increase of nearly 50 percent, or 11.7 percent a year, over four years. The union argues that wage increases over the past decade have not kept pace with inflation and that its education workers, who it says are the lowest paid in the industry, are struggling to make ends meet.

The province’s most recent offer called for an annual wage increase of 2.5%, or 10% over four years, for employees earning less than $43,000, and 1.5% for those earning more.

Despite government threats of hefty fines – $500,000 a day for the union and $4,000 for individual members – members of CUPE Local 256 have been protesting the government’s action, since 8 a.m. here and at MPs’ offices in Guelph and Orangeville.

In an email to AdvertiserArnott said he was in the office today attending scheduled meetings and had not received requests to meet with protesting strikers outside.

“As always, my staff and I are available to respond to inquiries regarding the provincial government, and we seek to ensure that everyone’s voice is heard,” he wrote.

Between 60 and 70 members line the sidewalks surrounding Arnott’s office at 9 a.m. Many wear signs on purple shirts, displaying their roles on school boards.

Care and maintenance workers march alongside ESL instructors, occasional teachers and the public singing – “Lecce and Ford gotta go” – in the form of high-pitched whistles and a mix of cowbells with passing car horns.

Two local residents with no connection to the union, Ciara Cruickshank and Lisa Town, came out to show the workers that they are supported outside their union.

Andrew Aloe, president of a casual teachers’ local of the Elementary Teachers’ Federation of Ontario, also came with four members to show his solidarity.

“The energy is good, you’re trying to make the most of it,” says CUPE Local 256 president and strike captain Bill Foster, pausing before waking the members.

Members are instructed to have fun and motivate people. On several occasions they walked up and down St. Andrews and Gowrie streets holding CUPE flags and signs.

It may be fun on the first day, but if the strike continues, Foster says reality will start to set in and the days will get tougher, both for the members and for the school boards involved.

“The problem is that the schools are going to close,” Foster says. “It’s a shame we’re here.”

All schools in the county remain open today, but directors of education for the Upper Grand and the Wellington Catholic District School Board have hinted closures are likely if the strike continues into next week. (Not all schools would be affected because some do not have CUPE-represented staff.)

Upper Grand District School Board (UGDSB) Director of Education Peter Sovran told the Advertiser, “we don’t think we can maintain this level of openness for very long; we are talking about days, certainly not weeks.

Sovran said the council was “signalling everyone, including families” to prepare to switch to remote learning.

“Our students and families tell us they want to be in their buildings, in their classrooms, with their friends, and that’s what we’re going to try to do to the best of our abilities,” he said. declared.

“There will be a time when we cannot provide that, certainly not on the back of the individual who is stepping in and supporting schools right now with these additional cleaning duties.”

There is an emergency committee that assesses schools with a color-coded system, and non-union staff are stepping in – “beyond their usual responsibilities”, Sovran said – to provide basic support and replace teachers. janitors and workers who repair and maintain critical infrastructure.

“They are employed by the [UGDSB] because we need them,” Sovran said of the council’s education workers, adding, “when they’re not there, we all feel it.

If there is a major problem, like a broken water pipe, for example, Sovran says there are few trained personnel available to handle such an emergency. This has resulted in a reduction in secondary school uses, such as community use.

“We will reevaluate by Sunday evening, if this continues there will be more cancellations,” Sovran said, adding, “the more you use a school building, the more likely you are to experience some of these maintenance issues. ” 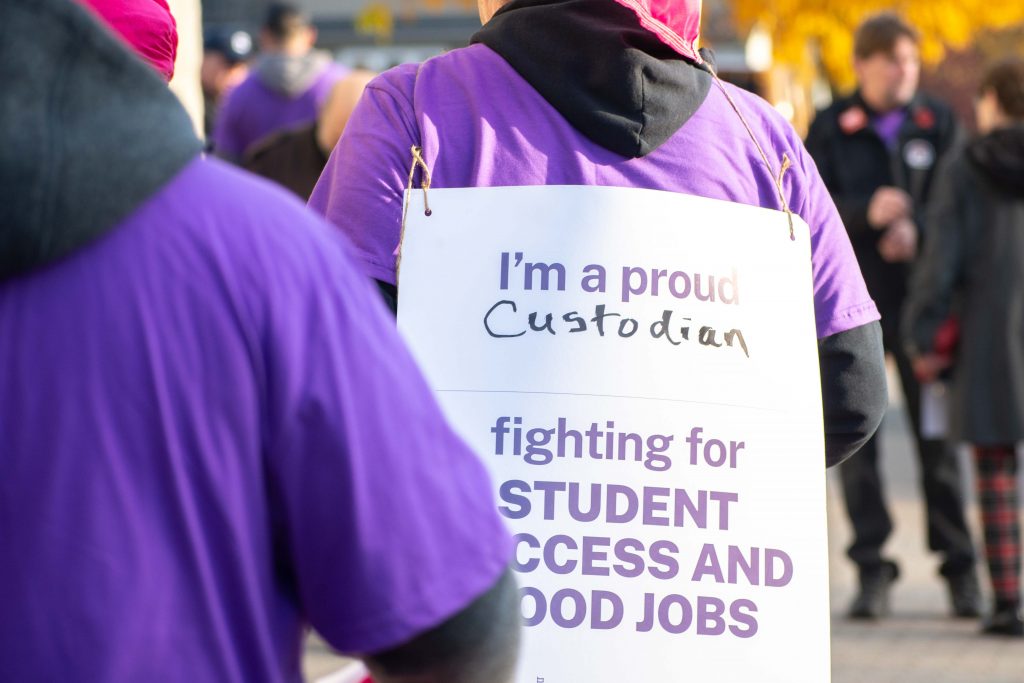 A CUPE member displays a sign during a strike in Fergus on Nov. 4. Photo by Jordan Snobelen

WCDSB spokesperson Ali Wilson previously said in an Oct. 31 news release that the board is encouraging families to prepare for remote learning.

“We all want students to stay in school and have a normal year of learning,” she added, expressing the wish that the union and the province “re-engage in discussions for the benefit of all parties involved.

UGDSB President Linda Busuttil did not respond to a request for comment.

He points out that the strike has nothing to do with local school boards, saying the issues are central.

The two directors of education agree.

In his emailed statement, Glazier said “items discussed such as wages and working conditions are central” and hopes for a quick resolution at the provincial level. 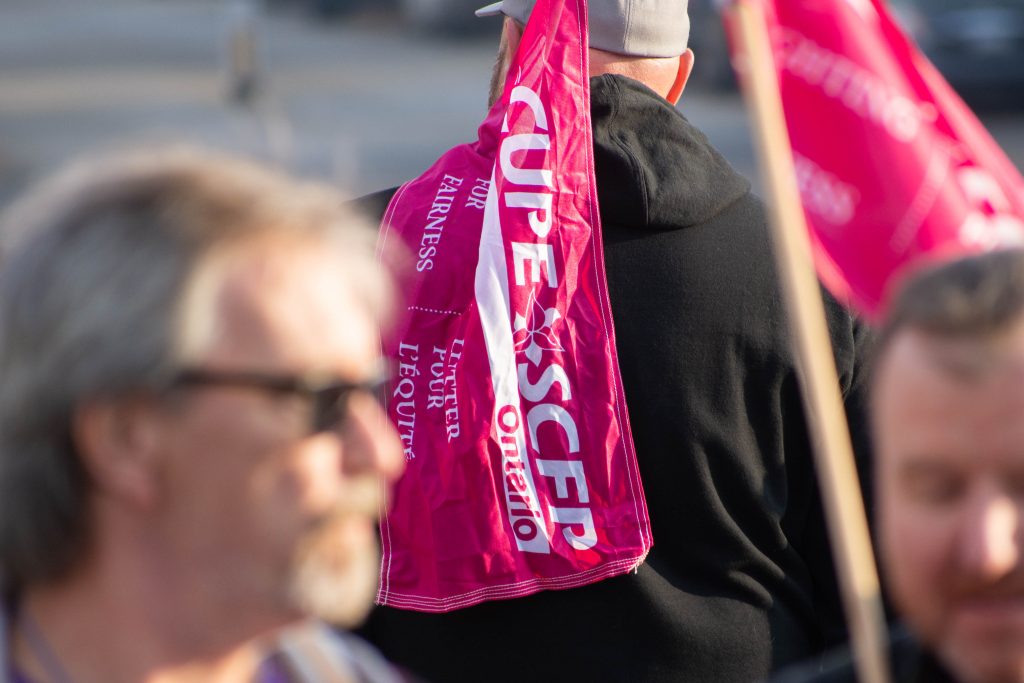 A CUPE member waves a union flag during a strike in Fergus on Nov. 4. Photo by Jordan Snobelen

Every day the members are on strike and not at work, they are not paid by their employer, however, the union pays its members “strike pay”.

Foster says Bill 28 stripped members of their constitutional and bargaining rights and “not only imposed a four-year contract on us, [it has] locked us into local negotiations for four years.

“Lecce and Ford put us in this position, we’re going to get through this.”