Central Ohio is expected to continue to grow at an even faster rate as major projects such as Intel’s semiconductor plants in Licking County come online.

More housing and infrastructure is needed to support the influx of people.

Over one million people live in central Ohio. The Mid Ohio Regional Planning Commission and U.S. Census data revealed that Columbus was the only city in the Midwest to grow by more than 100,000 people in the past decade and it estimates the area’s population will triple d 2050.

“We still believe that to be true. However, with Intel and all the other major economic developments, we believe there could be accelerated growth in the near term,” said Kerstin Carr, director of regional strategy and chief planning officer at MORPC.

Intel promises to bring 3,000 long-term jobs to the region with two semiconductor factories by 2025. The project began this summer in Licking County.

The site is busy with the activity of workers, trucks and bulldozers. Intel intends to build eight factories in total. Factories should attract suppliers and other businesses to the area.

Economist Bill LaFayette said it was prudent to expect more jobs from Intel before and after construction.

“Employment at Intel 10 years from now, if they fully follow their plans, could be around 12,000,” LaFeyette said.

The construction of the first two factories will require approximately 7,000 workers. LaFeyette said those jobs should stay in the area in various capacities.

“Maybe not at this level but close to it for the next decade,” he said. “And these workers will also be waiting for indirect jobs. Thus, each construction job will lead to another job in the region.

So is the region ready for all these new arrivals?

Based on census data, MORPC knows that the average Intel worker will likely live within 30 minutes of the factory. He developed a travel time map to assess the average journey to the site in various parts of the region. 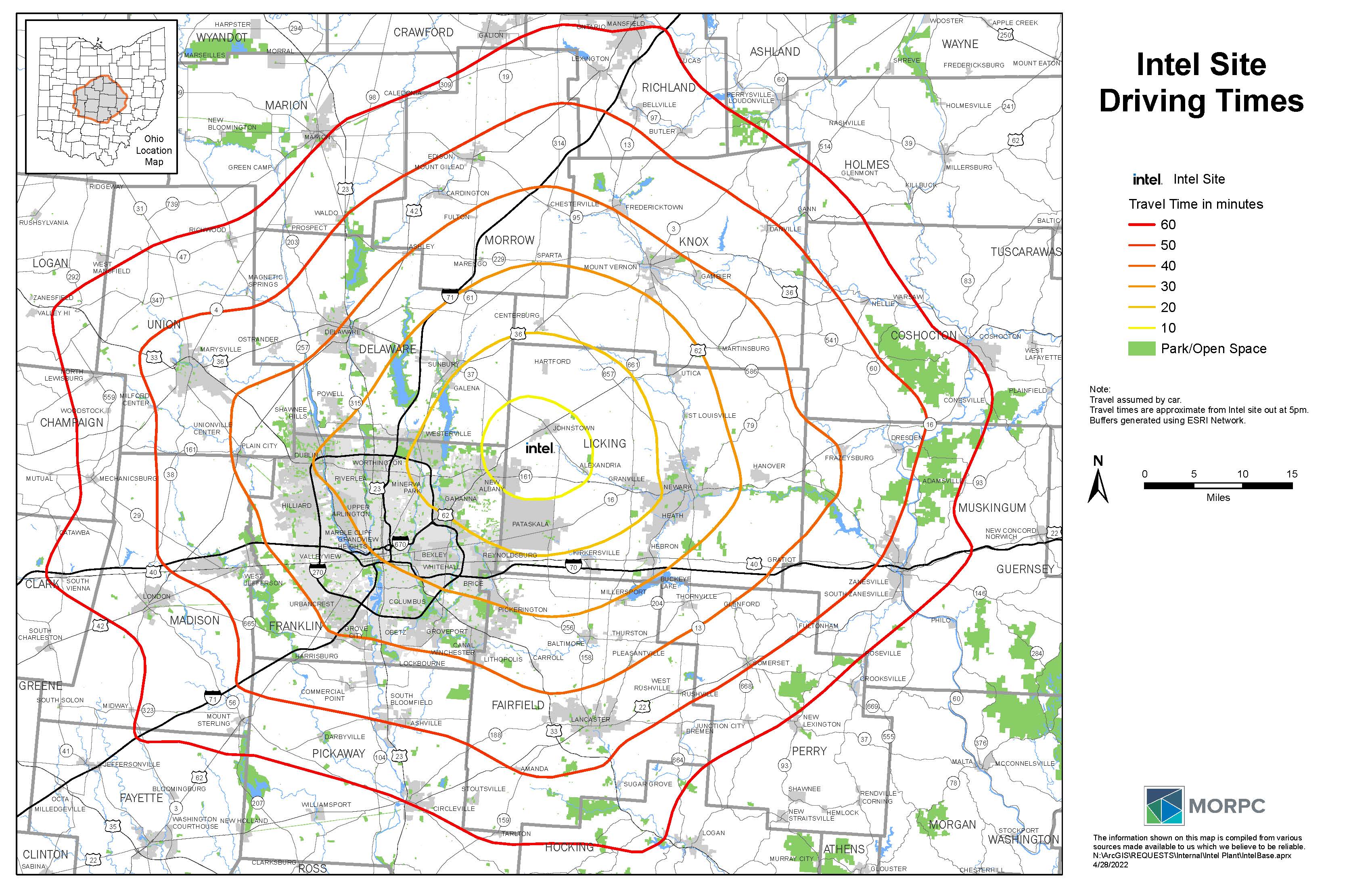 The MORPC expects most people to drive 30 minutes to get to work based on census data and available housing. [Mid-Ohio Regional Planning Commission]

Both LaFeyette and Carr said Columbus needed more housing to meet that demand.

A recent study by the Building Industry Association of Central Ohio found that the Columbus area needs to double the number of housing units over the next decade to keep pace.

Carr said one step could be for communities to deal with zoning codes that could limit the type of homes that can be built in those areas.

“And work with their communities to identify ways to create infill and development opportunities that really uplift their community as a whole and provide more homes for people of all income levels,” she said.

Intel is not the only billion dollar investment for the region. Honda recently announced that it will build a multi-billion dollar car battery plant in Fayette County, which will create 2,200 jobs.

And all those drivers going to Intel also need safe roads. The state is committing more than $600 million to upgrade State Route 161 to I-270 to provide better access to Intel’s megasite.

The rest of the funding will go towards sewer and water upgrades to support the operations of Intel and surrounding businesses.

“Not just 161 itself, which will likely need to be expanded at some point in the future to the Granville and Newark area, but their local roads are what they’re most concerned about,” Gill said. “As development appears in more rural areas of Licking County, they will use local road systems and not necessarily the national road system.

“If workers are forced to travel further for their jobs than they would like due to housing costs or scarcity, not only will those workers be worse off, but it will also lead to traffic jams and air pollution. unnecessary air, road deaths and other adverse consequences,” she said.

The MOPRC is updating its goals in the metropolitan transportation plan by 2024. It will reflect Intel’s announcement and other multi-billion dollar projects like Honda’s new electric car battery plant.

Comments on the proposed goals are accepted until November 4, 2022 and can be submitted to MORPC by email at [email protected] or in writing to MORPC, 111 Liberty Street, Suite 100, Columbus, OH, 43215, Attn: MTP .